A couple of people have requested information on how I painted a few previously posted Nurgle Plaguebearers and Chaos Space Marines.

So here's a short tutorial on how I do this.

Step 1:
The miniature was given a thin undercoat of pure white. I generally use Vallejo undercoats as I find these can be quickly applied with an airbrush.

Step 2:
Once the undercoat was fully dry, I applied a generous coat of Athonian Camoshade to the miniature using a Washbrush and then left the miniature to dry (mainly as the Lord or Terror had hidden her hairdryer....)

Step 3:
With the first layer of shade fully dry, I applied a second generous coat of Athonian Camoshade. This was then followed by a thick coat of Agrax Earthshade.


Step 4:
Having located the Lord of Terror's hairdryer and accelerated the drying process slightly, I painted the warts, intestines and other ikky fleshy bits with a thinned coat of Ratskin Flesh. Given that the base layer paints from GW are pigment dense, I used Vallejo airbrush thinner to do this, rather than the more expensive Lahriman Medium. As this is a Nurgle demon, I wasn't too worried if the end result wasn't totally accurate.

Step 5:
Anything not expected to be green or pink (ick!) was given a thinned coat of Dryad Bark.

Step 6:
The Dryad Bark areas were given a thick coat of Agrax Earthshade. Similarly, the Fleshy bits were given a coat of Reikland Fleshade. The miniature was left to dry overnight (the hairdryer had been removed after accusations of using it for purposes that were not deemed appropriate)

Step 7:
Fleshy areas were given a thinned layer of Cadian Fleshtone, layered to retain some of the darker Flesh showing through.

Step 9:
Teeth and bones were given a coat of Zandri Dust, followed up by Ushabti Bone and Screaming Skull. 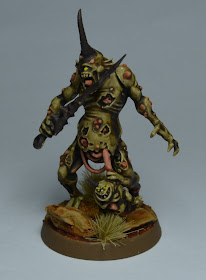 Once dry, Vallejo Matt Varnish was used to tone the whole model down.
Northmoor at 15:42
Share